This content was originally posted on WrapsodyBaby.com, a website and babywearing business formerly owned by the author.

I was standing in my living room, talking with my late friend’s mother, when the girls’ conversation caught my ear. I turned my head toward where they sat nearby in colored chairs at our small craft table. Though both in high school now, they were just about four years old that day. “Sometimes, Mommies have to die,” Gwen said to Morgaine. Morgaine nodded in agreement, her strawberry curls brushing her shoulder.

“Nope,” Gwen agreed, shrugging, her round face serious but relaxed. “She didn’t.” And they shifted conversation topics as casually as they shifted crayon colors. Clearly, Sarah had passed her pragmatic strength to her young daughter during their short time together.

When Morgaine was ten months old, I had called my friend to ask for advice in getting my daughter to fall asleep in her own crib. Sarah had recently recounted to me her own efforts at moving her daughter, who was about a year older than mine. By way of greeting, I asked her how she was. “Not so good,” she told me. “I’m sick.”

“Oh, man! Do you have the flu?” I asked. Sarah was not one to complain, generally, so it was clear she must be feeling pretty badly.

“No. I have cancer.” A thousand things flashed into my mind as I reached for words, finally asking, “Are you going to be ok?”

Though it turns out that the 6 month prognosis her doctors gave her when they diagnosed her with stage IV colon cancer would stretch to three years, we were in our early twenties still when she died. During those years of saying good-bye, in spite of her pain and her grief, she cared for all of us who loved her. She used some of her last strength to don a beautiful blonde wig to come to my first wedding. One of her last trips out was to buy yarn for a baby blanket she would knit for me — a beautiful story for another day.

In middle school and early high school, Sarah was one of my closest friends. She sang in a beautiful, strong soprano and spelled terribly — in fact, after she chose her daughter’s name, she had chosen to spell it phonetically in case her child was cursed with her way of spelling. We spent our time debating important things like the merits of facial toner vs. rubbing alcohol vs. witch hazel. We colored our bangs with bright mascara, we passed endless notes and chain letters back and forth. She poked fun at my giant “punch bowl” bras during our sleepovers at her house, and I scooped her up and carried her around to poke fun at her very slight frame.

We burned pancakes in a pan of oil so badly that not even her dog, Bonnie, would eat them.

Sarah’s mother once bought me a small pink tchotchke — a plastic pink mirror with a tiny plastic kitten glued so that it was looking at itself. On the mirror was written the words, “You’re purrr-fect.” I don’t know if she knows that I kept that mirror for over twenty years before I was ready to pass it on. Kindness was a way of life for them.

I taught Sarah active vs. passive verbs in Mr. Sirois’s eight grade English class using the examples, “He did her. She was done by him.” I didn’t know then that she would some day teach me a lesson that would change me forever.

Recently, another woman that I love was diagnosed with a terminal illness. Autumn always reminds me of my old friend, but this autumn it feels particularly fresh as I come to terms again with the terrible unfairness of living, of an illness in someone with so. goddamned. much. to give to the world, and particularly to children who need to say goodbye to their mothers all too young.

Sarah and I fell out of touch in our late high school years when she transferred to a private school, but when I got pregnant in my twenties, I was overwhelmed with the urge to reconnect. I called her out of the blue that February in 1999, and after some small talk, she asked, “So, what’s new?”

“Ah,” she said. “I’ve got you beat. I’ve got a kid AND a husband. Have you thought about names?” Yes, I told her. If it was a girl, we’d name her Morgaine. “My daughter is Gwenevere!” she told me. “That’s so exciting! They’ll be the best of friends!”

Though I would keep in touch with Gwen’s family over the years, life had other plans for our girls — funnily, though, they’ve grown into many of the same interests. I still fantasize a little about the idea of them coloring each other’s hair and burning pancakes together, and maybe one day their paths will bring them together, and hopefully, it won’t be a path down beautiful autumn-lined roads where one is walking with death in a dark room, sharing beautiful stories and kind words with all she encounters.

Shortly before her death, I dreamed of Sarah. We were on the third floor of an open-concept home with lots of windows with most of our middle school/freshman year crew. She lay at first on a green couch, offering us comfort and words of wisdom much as she had at one of her daughter’s birthday parties from her place in the living room, although she come to the party directly from a hospital stay. At some point in the dream, we moved to the roof, where acorns were falling like leaves (and softly, like leaves) in the warm autumn sunshine.

Morgaine was barely two when Sarah passed away shortly after her 24th birthday, between Thanksgiving and Christmas. I remember our last visit together; she woke for a bit so I could spend time in her room, and we talked about my plans for an unassisted homebirth. “Don’t be that guy whose house was underwater,” she said. “You know the story? He was on his roof surrounding by rushing water — a boat came, and a helicopter, and a plane, and he kept telling them, ‘God will provide.’ After he died and went on to heaven, he asked God, ‘Where were you?’ ‘I sent you a boat, a plane, and a helicopter!’ God told him. ‘What more did you want from me?'”

Although Orion’s birth (and Isaac’s unassisted homebirth afterward) proved unremarkable, her words eventually carried me through a divorce and several years of single motherhood. My ability to seek out a life raft was anchored in no small part by her words and her family’s incredible network of support, of which I was honored to be a small piece.

Sometimes Mommies die. Sometimes they die far, far too young, through illness or accident or otherwise. I’ve come to believe that the only way to cope with that terrible truth is to gather all that I’ve learned from them and carrying it like tangible evidence of their life — Sarah taught me through her grace, her pragmatism, her kindness, her magnanimity, and her tremendous, enormous love that I can carry the embrace she left behind like the warm blanket she left for my babies and shake it out now and then in order to resurrect her legacy.

I have lost some incredible women during my life, and the grief lives in me — but larger than the grief is the gratitude that I have known them, that I have loved them, that I have been loved by them, and that I have the great fortune to carry some of what they had to offer this world in my heart, in my work, and in the things I teach my children. And that they have taught me to say, today, what there is to be said. Sometimes, Mommies have to die. I hope my children never have to come to terms with that until they are old and wrinkled themselves. I am blessed still to have my own mother. I am grateful every day to hold all five of my children in my arms — I have neither had to leave behind my children nor my mother, nor have I had to remain when they have left me.

I miss my friend. I miss the life we had planned. But I am grateful for all she taught me, and now, as I walk the path of acceptance again, I am grateful that I can still feel her presence each day — from the lessons she taught me by living, in the changing colors of the leaves, in the dying warmth of the autumn breezes, in the faint scent of wood smoke in the air. In my children’s eyes and in photographs of her daughter. Because even when mommies have to die, there is part of them that lives forever and forever. 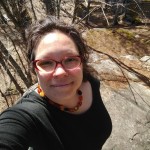 I'm an overthinker who loves the word "epiphany" and despises small talk. Give me information, egg sandwiches, unsweetened creamy coffee, and cheesecake (or even just a little permission and encouragement) and I'll give you direction and opinions and enthusiastically join you in connecting the dots or drawing the cards that will define your direction.

If You Feel Small

On kids, responsibility, and apologies

Things I Want My Child to Learn

This site uses Akismet to reduce spam. Learn how your comment data is processed.